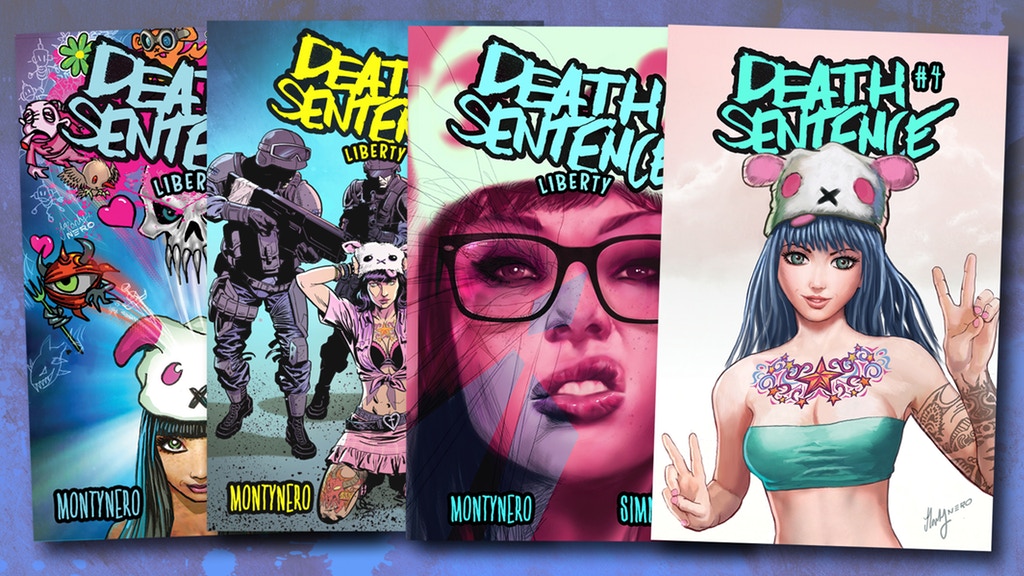 The 250 is up! Closing in our second bookplate stretch goal too . Huge props to all our backers.

I just checked and there's only 2 of the Mega Ben Oliver rewards left! And five of The Verity Gold Set. There are no exceptions, when they're gone they're gone for good.

Due to popular demand we've added a new reward level combining The Verity Gold Set, The Story So Far, and the rare Ben Oliver variant cover of issue #4 (limited to 50). There are only 5 of these new mega-rewards available, for £100 each. You'll find it  listed in the rewards section, though it's won't go up in the Story section for a few days.

There's no change to the number of Gold Sets or Ben Oliver #4 Variant Covers available in total. But it does mean there's only 5 Verity Gold Sets left on their own, as the other five are now part of the expanded Ben Oliver mega-reward.

The only question was what to call such an incredible combination of rewards. So to keep things simple we settled on The Mega Ben Oliver Verity Gold Story So Far!!! Ha! So snappy! It rolls off the tongue. Check out the rewards section for the full  mindblowing specs

Meanwhile, are you aware of the goodness going on over at Miskatonic High? Writer Michael Shea describes it as "the comic series about teens who take on the monsters of H.P. Lovecraft and their small-town high school...they're just not sure which is worse." It's currently funding issue 4, in which five students stumble into a hollow world war of Druids vs. Saurians, with a heavy slice of dieselpunk and general weirdness. Like Death Sentence Liberty, you can get all the issues if you're new to the comic.  I love the cover art too, check out this fine image by series artist Ryan Mendoza.

I can't wait to read my copy. Give it a whirl.

Furthermore, we're galloping on to the next reward  - an exclusive Death Sentence art print! That'll unlock when we his £5000, so keep spreading the word by whichever means you can!! Like RT'ing this handy message for instance. https://twitter.com/montynero/status/1169573593665232896?s=20

I was reflecting last night on how lucky we are to live in times where anyone can create and publish their own work. Some of the greatest talents in comics never got the same opportunity which kickstarter offers, and it's all supported by you guys and your enthusiasm for original work. I love how global it is too - so far we've had backers from  The United States, United Kingdom, Australia, Germany, Netherlands, France, Canada, Ireland, Finland, Belgium, Sweden, New Zealand, Switzerland, Japan, Malta, Greenland, Spain, Israel, Czechia, and Singapore and we're not even out of week one. It's a global market and it inspires me to think of so many people in disparate countries coming together to enjoy the same story.

Till next time (when I'll be sharing some of the other great titles I've found on here).

"Death Sentence reads like only the best parts of Watchmen -- a social analysis that exceeds the medium of comics, easily the equal of Dostoyevsky or Dickens" @Popmatters

Yes, someone actually said that about our humble comic series, and who are we to not copy and paste the shit out of that glowing tribute. There's a lot of bang for your buck with a Death Sentence comic, it's packed full of action and epic character moments, but if you like a little stimulation for the old grey matter there's also a lot of subtext to chew on. And in these crazy times, we all need a little rebellion to inspire us.

But I'm not here to talk about Death Sentence, not when there's so many other great comics on offer on this wonderful site. Let me draw your attention to Vessels for instance, by the mighty Dave Cook and artist Edward Bentley. You may recognise Dave's name from the behemoth that is Killtopia, published by BHP, a kickstarter comic that regularly racks up numbers the rest of us can only dream of. If you liked that, your sure to like this, which is similarly inspired by video games (Dark Souls) but this time in the RPG arena.

Dave describes it thus: "When the fantasy realm of Cairnthala collides headfirst with our modern day universe, the fabric of reality shatters, throwing existence itself into chaos, as alternate dimensions, wormholes, cataclysmic events, and grotesque creatures rip the laws of logic and reason apart.

As existence itself breaks down, a gifted woman called Wake emerges. She's a fabled warrior of legend, who is said to possess the power to re-shape reality. Together with a band of outcasts and rogues, Wake must face her darkest fears and slay a warband of five horrific knights known as Vessels - the twisted and demonic incarnation of the five human senses.

Only by slaying the Vessels and collecting their souls can Wake save both our world from complete systemic collapse."

Pretty cool! And being a Dave Cook production, you know it's going to ship on time and  feature some great value extras. Dave knows how to write a good comic, and Edward's a talented artist, so I had no hesitation in backing this and can't wait for my copy.

Finally, don't forget our social media stretch goal. Blag yourself more free stuff with your Death Sentence order, just by Retweeting the following tweet. https://twitter.com/montynero/status/1169573593665232896?s=20 We're nearly half way there, so if you haven't followed the link yet now is the time to make a difference.

Yurgle! We're closing in on that first stretchgoal. Great to see. We shipped 5 with each order last time, so lets see if we can beat that. The first one is a free vinyl sticker, and with just £500 more to go it looks nailed on.

Huge thanks for everyone reading Death Setence Liberty. The reviews have been great with stellar talent like Martin Simmonds, Ben Oliver, and Luke Ross aboard it's surely no coincidence. There's some really cool news coming next week too, as we build the campaign. I'll also be sharing some of the cool comics I've found and backed on here. Exciting times!